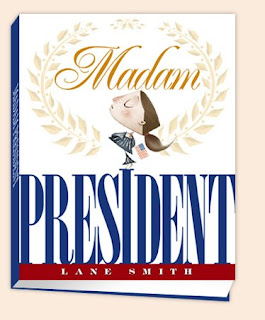 HF: Congratulations on your new (and timely!) children’s book, Madam President! Can you tell us a little of what it is about?

LS: Thanks. It’s about a girl who imagines she’s president of the United States. A few books back I did a “presidential” book for the boys: John, Paul, George & Ben, so in the democratic tradition of Equal Time I made one for the girls.

HF: I just have to say, once upon a time, that I was Katy. I might even still be one. She is such a fantastic character; do you know some Katy’s? Is she based on anyone you know?

LS: Probably there’s a bit of myself in there. And there’s a neighbor girl down the road named Katie who influenced my Katy as well.

HF: I just love your gorgeous illustrations. Is there any one medium you prefer to work in or do you dabble in a little bit of everything?

LS: I like a little bit of everything. Mixed media is the best description. Sometimes I paint in oils and I collage bits of paper into the work. Sometimes I do charcoal or pencil drawings. In the case of Madam President I drew the pictures in pen and ink and painted them digitally in Photoshop. Some of the textures were created with oil paints and scanned in later.

HF: You collaborate with a lot of authors; Jon Scieszka, Bob Shea, Eve Merriman and many others. Do you find it easier to work with other authors or to write and illustrate your own material? Is your process different?

LS: I like both. I love to conceive an idea then write and illustrate it myself but I also love interpreting the work of others. My biggest compliment is when an author says, “When I wrote this I never imagined you’d illustrate it this way.” (At least I think that’s a compliment!)

HF: Just what is your process anyway? Once you conceive an idea, how do you go about creating a book?

HF: Which part do you find more difficult? The writing or the illustrating? Do they both come naturally to you?

LS: Definitely the writing. I’m a visual person so I’m always thinking in terms of mood, color, shadow and shapes. When I write I tend to overwrite so I rely on friends and editors to cut my stuff down.

LS: I work in an old turn-of-the-century one-room schoolhouse.

HF: What are your influences? Any particular books? Illustrators? Authors?

HF: What do you think of graphic novels? Is it something you have ever considered trying?

LS: I love graphic novels. I was a huge comic book collector in junior high and high school. I used to go to the San Diego Comic Con in the 1970s before it became the behemoth that it is today. But I have to admit, I’m not great at sequential panel art. I’ve tried it, Flying Jake, Baloney (Henry P.), but with limited success.

HF: What are your favorite books for children?

The Carrot Seed by Ruth Krauss & Crockett Johnson
The Monster at the End of This Book by Jon Stone & Michael Smollin
The Treehorn Trilogy by Florence Parry Heide & Edward Gorey
Robert Francis Weatherbee by Munro Leaf
The “…Can Be Fun” series by Munro Leaf
The Little Prince by Antoine de Saint-Exupery
Struwwelpeter by Heinrich Hoffman
Green Eggs and Ham by Dr. Seuss
The “This is…” series by M. Sasek
Did I Ever Tell You How Lucky You Are? By Dr. Seuss
McElligot’s Pool by Dr. Seuss
Happy Birthday to You! By Dr. Seuss
Tales for the Perfect Child by Florence Parry Heide & Victoria Chess
Fables You Shouldn’t Pay Any Attention To by Florence Parry Heide, Sylvia Worth Van Clief & Victoria Chess
Uncle Shelby’s ABZ Book by Shel Silverstein
The Happy Day by Ruth Krauss & Marc Simont
Wizard of Oz by Baum
Where The Wild Things Are by Maurice Sendak
Arm in Arm by Remy Charlip
How Little Lori Visited Times Square by Vogel and Sendak
Thirteen by Remy Charlip & Jerry Joyner
Donald and the… by Peter Neumeyer & Edward Gorey
Donald Has a Difficulty by Peter Neumeyer & Edward Gorey

I’m know I’m leaving out William Steig and Barbara Cooney and Dahl and Raymond Briggs and the Provensens, Kipling, Lewis Carroll, Eleanor Cameron and so many greats not to mention all my contemporary peers but I could be typing all day.

HF: Do you have any favorite books for adults?

LS: Again, many:
Marcovaldo and The Baron in the Trees by Calvino
To Kill a Mockingbird by Lee
Anything by Flannery O’Connor
Anything by Poe
Most of Capote
CivilWarLand in Bad Decline by George Saunders
David Sedaris…
I read a lot of biographies and nonfiction as well.

HF: What is up next on your horizon?

LS: The Big Elephant in the Room (spring ’09) is about a misunderstanding between friends.

Princess Hyacinth (The Surprising Tale of a Girl Who Floated) is about a princess with a curious affliction – unless she is weighted down by a heavy crown and heavy stones and weights, she floats up into the sky. It was written by Florence Parry Heide who you may guess from my above ‘list of Favorite Books’ is one of my heroes. (Fall ’09.)

Thanks so much to Lane Smith! Visit his website here.
Posted by Estella at 12:35 AM