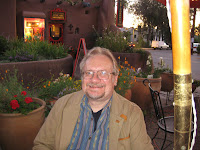 Every once in a while, I come across a book that I think is just perfect. The Island of Mad Scientists: Being an Excursion to the Wilds of Scotland, Involving Many Marvels of Experimental Invention, Pirates, a Heroic Cat, a Mechanical Man, and a Monkey, was one of those books. Technically the third in a series of books featuring three very lively, funny, enjoyable young teen characters, it nonetheless works well as a stand-alone read. One part adventure book, one part P.G. Wodehouse, it promises to captivate readers of all ages. See my review here. When Howard Whitehouse was offered up his time for an interview, I couldn't resist the chance to talk to the person behind this hilarious book. Besides, I heard he does all his own stunts.

MF: Because I started the series on the third book, I missed out a bit on the origin story of the characters. (If you don't mind explaining it a bit.) How did all the kids meet? What were their first two adventures (in a nutshell)?

HW: ‘The Strictest School in the World’ is a prison break novel, set in a Victorian boarding school. Emmaline’s very hoity-toity upper class parents have sent her home from India to attend this hugely repressive girl’s school to become a proper young lady. What she really wants is to become a pioneer of aeronautics (as one might). But she’s scared of plunging to her doom in the process. She’s staying with her eccentric Aunt Lucy the summer before school begins, and there she meets Rab – “Rubberbones”- an enthusiastic village lad who never seems to get hurt. And he has an uncanny ability to float. So she has a test pilot. But, after a couple of not entirely successful attempts at flight, she is sent to St. Grimelda’s, where almost everything is banned. She meets Princess Purnah, who is also a prisoner – sorry, pupil, there. There are unsuccessful escape attempts, and a lot of trouble with the school pterodactyls. Plus friendly Romany travelers, mad old colonels and a lot of groceries are used as missiles.

The second book, “The Faceless Fiend” begins a few weeks later, with all three youngsters staying at Aunt Lucy’s cottage, where the deranged Professor Bellbuckle is attempting to educate them. He’s not very gifted as a teacher. But then villainy intrudes when an international criminal mastermind, known as the Faceless Fiend for his, er, total lack of an actual face, schemes to kidnap Purnah for reasons involving international politics of a nefarious sort. In the sort of mix up that comes from dressing up in the bedroom curtains, Rubberbones is seized in the belief that he is the princess. The action moves to Darkest London where Sherlock Holmes and a rented balloon help to locate the abducted boy on the roof of a very tall house, but the Fiend’s Masked Minions intervene, and Rubberbones is lost again, wandering the
East End in search of his own family. There’s a lot of Dickensian stuff with rat-killing contests, elderly dogs, and street urchins. Purnah, meanwhile, tangles with her old headmistress and some stuffy bureaucrats who want her to go back to St. Grims, while Emmaline become involved with a stunt aviator called The Belgian Birdman. In a thrilling finale at the newly opened (and now opening) Tower Bridge, Emmaline uses the birdman’s craft to save her friends from the clutches of the Faceless Fiend as they fight on the roof of an out-of-control coach.

There are chocolates and cream cakes involved, as well.

MF: So, where did you get the idea for Emmaline and Rubberbones? How about Princess Purnah?

HW: I’d been reading about lot of wacky Victorian inventions for a gaming project that never took off, and it occurred to me that – as in “Those Magnificent Men in their Flying Machines” – these crazy early aircraft would be ideal for a funny adventure story. It was when I decided that the pioneer aeronaut was a kid – and then, specifically, a teenage girl – that Emmaline came to mind. The idea was that she’s intelligent and thoughtful, brave in many things but terrified of doing the thing that is most important here – actually flying. So, of course, in all three books she has to pluck up her courage and fly in devices that she knows are completely unsafe.

Rubberbones is the boy everyone knows, the impulsive lad who, no matter what he does, never seems to get hurt. He was the obvious match for Emmaline. He’s all heart and no planning.

Princess Purnah is one of those characters that writers will tell you simply jump out of the story and demand a starring role. She’d begun simply as a foreign girl who the mean girls picked on and the teachers couldn’t be bothered to educate in the English language. She was a bit of a victim. But then she just burst out of the story by trying to escape, and I knew I had to rewrite some of the earlier text to at least suggest that there was another side to her.

MF: Did you plan to write for middle grade readers? Or is that just where the story took you? (Or did the publishers/agents decide all that?)

HW: I’d written a funny adventure book some years previously set in the Victorian army (but failed to find a publisher for it). That had been aimed at adults. I hadn’t really thought of writing for young readers until my friend Joanne Schwartz, a children’s librarian in
Toronto, suggested I try it (and handed me a pile of books to read). I started writing in a style that came easy to me – a bit formal and old-fashioned - and I thought it might work for, say, a twelve year old reader (not that I had a lot of knowledge as to reading levels). As it was, my editor told me that I was pretty much on the mark; sometimes I have to simplify something, or explain a bit of history, and every so often we have to take out a joke that’s too sophisticated (or too rude!)

MF: Who is your favorite character in the books? Why?

HW: I have to say Purnah, because she’ll stab me in the arm with a sharpened butter knife if I don’t. And Professor Bellbuckle, who is simply deranged.

MF: I have found that humor is fickle; not everyone laughs the same thing. Is there a "secret" to writing humorous stories? How do you go about it? Do you have an inspiration?

HW: Humor comes easily to me, sometimes at times it shouldn’t (which is why I should not be called on to testify in court or speak at a funeral). I teach creative writing courses for middle graders through my local library system, and I see that different people have hugely different senses of humor. This has a lot to do with age, of course, and what works as a written rather than visual piece; writing a banana skin gag, for instance, doesn’t really work very well,

For myself, I just sit down, start typing, and entertain myself. That’s pretty easy for me! Inspiration? Kids, cats, daily life. If I had to name a writer, it has to be P.G. Wodehouse for sheer hilarity. Of modern writers, Bill Bryson, Janet Evanovich and an English guy called Harry Pearson, who wrote a brilliant book called Achtung Schweinhund! about his (and my) obsession with model soldiers.

MF: How you decide to become a writer? Is it something you've "always" wanted to do?

HW: I tell the audiences at my appearances about my first efforts as a fictioneer. When I was about seven I wrote a wild west story where all the characters were teddy bears. I no longer work in that genre.

In my teens and twenties I wrote a lot of articles and games on military history, later writing two non-fiction books about Victorian battles in Africa. In the nineties I wrote some short stories and an unpublished novel about a completely idiotic (yet courageous) British officer called Binky Bagshot, which were not a million miles from the Emmaline and Rubberbones books in style. Twelve people in the whole world though they were terrific. I also wrote some “Victorian Science Fiction” short stories for a project which never came off.

It was only in my forties that I began writing for young people, and it seemed to work out all round.

MF: What are your five favorite books of all time (or at least currently)?

My favorite kids’ book is “The Wind in the Willows.” I’d also add Lloyd Alexander’s “Prydain” series, although technically that consists of four books. I thought Phillip Reeve’s “Mortal Engines” series was terrific, as well.

Aside from that? Max Allen Collin’s “Stolen Away,” a mystery set around the Lindbergh baby kidnapping. Njal’s Saga. And something by P.G. Wooster? Hmm. So many of them. Maybe “The Code of the Woosters”.

MF: Code of the Woosters is brilliant, I have to agree. In a not-quite-completely unrelated question: do you have a favorite joke?

HW: This is a very visual joke, since it really demands the teller flapping like a penguin and making weird bird noises.

A man is walking down the street, when suddenly he is accosted by a penguin. The penguin flaps his wings, says, “Parrrrrppppp!!!!”, and sticks his little penguin wing tip in the man’s hand. He waddles along like this, while the man can’t get rid of him. They meet a policeman, who says, “Where do you think you are going with that penguin, sir?”
The man explains what happened. the policeman says, "If I were you, I’d take him to the zoo, sir.” “Oh, right!”, answers the man, gratefully. “Good idea! the zoo!”

The next day the policeman sees the man, together with the penguin, walking towards him, wing-in-hand, smiling and parrrrpping away..

“Didn’t I tell you to take that penguin to the zoo, sir?” demands the policeman.

“Oh yes, officer. It was wonderful. Thanks for suggesting it! We are off to the circus this afternoon!” replies the man.

MF: So, if you don't mind telling us, what can we look for from you next?

HW: My next thing for Kid’s Can Press, for 2010 (alas!) is “Bogbrush the Barbarian”, a hugely silly fantasy romp about a muscle-bound barbarian hero so stupid that all the other barbarians notice. It involves an epic quest to the city of Scrofula to prove that Bogbrush is, or might be, but probably isn’t, the true heir to the throne. It’s a lot of fun, with a fake "educational" aspect where I throw in ludicrous quizzes, “Did You Know?” bits, and life advice that any halfway bright ten year old will immediately disregard.

I’ve got the elements of a new “Emmaline and Rubberbones” novel (set partly in the American west, with the real life robber gang known as the Wild Bunch as characters), but so far it’s just an outline.

And I’ve just finished the first draft of a young adult novel about a dangerously computer-literate teenage girl, which I wrote in partnership with an actual teenaged writer. It’s very funny indeed, if I say so myself!

MF: Thanks for your time, Howard!

You can visit Howard at his website or blog. Or read chapters of his novels here and here. And if you didn't get enough of him in this interview, you can find some videos of him here.