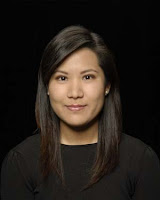 Christine Son is a lot of things: a woman, a lawyer, a Korean-American, a person who "loves peach cobbler, silly movies, laughter, stand-up comedians, The Daily Show, Hawaii, Balenciaga handbags, Texas Hold ‘Em, Belvedere vodka, chocolate, Spam (the quasi-food, not the Internet scourge)." And now, she can add writer to that list. Her first novel, Off the Menu, was recently released, and we're pleased that she was able to take time out of her busy schedule to answer some questions about her book, about being a child of immigrants, and about balancing lawyering with writing.

--Anna
Diary of an Eccentric