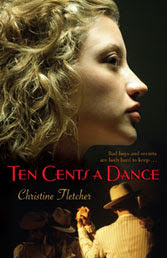 In 1940s Chicago, a fatherless 15-year-old girl whose mother has severe arthritis and can't work anymore has pretty much one option for earning money: working in a dead-end job in one of the meat packinghouses. Which is exactly where Ruby Jacinski finds herself. Until one night, at a local dance hall, she meets Paulie Suelze. He tells her that she can earn three times as much money as a "dance instructor." Desperate to get out, and longing to dance, Ruby takes Paulie's advice, and checks the dance hall out. It's not quite what she thought it would be, and as she soon finds out, neither is anything in her life.

There was much to love about this book. Inspired by her great-aunt's experiences with taxi dancing -- women who were paid to dance with men -- and affair with a prominent gangster, Fletcher writes with evocative language, both about Ruby, the poor districts of Chicago, and about jazz and dancing. There were moments when I wished that the book had a soundtrack, just so the vivid descriptions of the music and dancing would come to life. It's an exciting musical era -- the early 1940s -- and Fletcher does it justice. But beyond the captivating music and dancing (oh, how I could see that -- it reminded me a lot of Swing Kids), I loved Ruby as a character. Naive but determined, she jumps into the world of taxi dancing head first, and comes up swinging. She is such a feisty character, that you just want her to win, to succeed, to get out, to enjoy life, to be happy. There's depth in this book, Fletcher touches on race and class, on the struggles and desires of poor people (of all ethnicities) to get out and move up, and how difficult it is. Fletcher also touches on relationships -- how a girl's longing for acceptance can get twisted and used by the lonely men around her -- and on the nature of secrets.

On top of all the depth and description and writing, Fletcher manages to turn out a winner of a plot. It's full of suspense and intrigue, backstabbing and unexpected heroics. Ruby shines all the way through; she's a scrapper, a fighter and you know she'll make it somehow. There are some great seedy characters who Ruby unfortunately becomes involved with. Sure, it's melodramatic at moments, but it kept me captivated the entire time I was reading. A real winner of a novel.

You can find out more about Christine Fletcher and her books here.
Posted by Estella at 1:24 AM