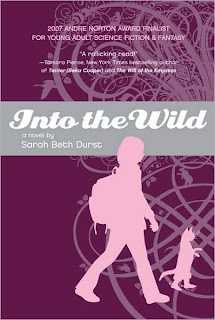 By Sarah Beth Durst
Penguin Group, May 2008
Reviewed by Jodie

Sarah Beth Durst’s first novel ‘Into the Wild’ is an imaginative story filled with fairytale characters trying to live now they are free of their story tale roles. Rapunzel, Gothel and Puss in Boots have been carefully living in the human world with many other familiar characters ever since they escaped from the magical forest like Wild, which had forced them into acting in their traditional stories. Rapunzel, pregnant when leaving the Wild, magically delayed giving birth until she felt safe and then had her daughter, Julie in the human world. Their family is unusual but cleverly reflects the different kinds of family structures found today; Gothel is Rapunzel’s stepmother, Julie’s father is missing and Puss in Boots is Julie’s adopted brother in law.

Julie Marchen isn’t an ordinary teenage but she’s not extraordinary either. She may be the daughter of Rapunzel, the woman who rescued the fairy tale characters from enslavement, but having been born in the human world long after this happened she feels set apart and shunned by the fairy tale people. With a vicious vine imprisoned under her bed, eating all her best footwear, she is never going to fit in at school. Although she has a loyal best friend, Gillian, who is going through the same sort of isolation at school Gillian doesn’t understand the problems Julie has with the fairytale characters, she thinks it’s all a game. Unable to make anyone understand her Julie is the perfect companion for teenagers who feel alone and tired of being different.

When the Wild escapes, wished back to full strength by an unknown wish, these differences are what save her. Not fairytale enough to be immediately trapped into a story but aware of what the Wild does, it becomes Julie’s job to walk into the evil forest spreading over her home town and fight to rescue her mum and everyone else it has transformed. Julie is overwhelmed and scared but she is also smart and resourceful once challenged. Julie transforms from an embarrassed teenager who complains and shouts at her mother to a girl who tries her hardest to beat the cunning Wild. At the beginning she is quite an infuriating character, although she is still someone readers can sympathise with but as Julie gains knowledge about her mother and herself she becomes the kind of girl to cheer for. Julie’s infuriating beginnings are an understandable reaction to her lack of power, lack of understanding and feelings of being kept apart from her family’s experiences, things all teenagers and adults will identify with.

Durst’s novel deals with the big issue any modern take on fairytales should include. As the characters are recaptured by the Wild they revert to playing the roles assigned them in stories. The saddest transformation is Gothel’s who involuntarily changes from being a loving grandmother into the child eating witch she started her life as. She is powerless to resist the Wild’s control even though the character she is made to play is no longer and perhaps never was her real self. By looking at fairytale characters as real people forced into roles that are not true to their personalities Durst examines how traditional stories helped to form unrealistic standards for human behaviour and gave fodder to form cultural prejudices. Old women often took on evil roles, handsome men were often good rescuers and this lent support to people’s biases. This re-examination of fairy tales in light of modern criticism is essential for any novel that engages with the stories.

Durst’s book is written in an easy to read, compelling style. It immediately catches your attention and makes you curious about Julie and her journey. All the characters and their actions are vibrantly described but sometimes not enough time is given to each character. Characters like the outgoing, boy crazy Cindy and the dynamic Gothel deserved their own thorough development but to keep the book well paced and forward moving Durst has to sacrifice any diversions from Julie’s quest. It would be wonderful to see these characters revisited and placed at the centre of the action in future books.

‘Into the Wild’ is a great book to get young adults hooked on books that reinvent fairytales. Adults might be expecting a bit more toughness and psychological horror from these kind of books but Julie will appeal to anyone who has ever struggled with being different and convince them this book is as worthy as adult novels on similar subjects.